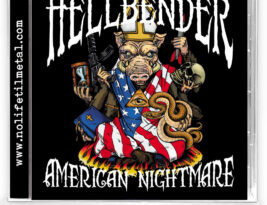 Hellbender was formed in 2012 by two life-long friends, Clee & Eric, who had been playing in bands together since the mid-1990’s. According to Clee,“We wanted to make this band, as HEAVY as possible! We mix the old school sounds of Iron Maiden , Black Sabbath , and Metallica with a new school twist of Mastodon , Hatebreed and Lamb of God .» Dollar Bill joined in January of 2012 and the band began performing gigs across California in November 2013.

The band released their first independent record titled Steel, Blood & Bone in May of 2014 and their second independent release titled Falling Down in August 2016, produced by Produced by Nick Bothelo and Julian Kidd. The band also recorded two music videos directed by Mike Sloat, known for his work with Testament and Machine Head .

In May of 2017 the band headed out on West Coast, USA tour with Destruction , Warbringer and Jungle Rot, including the infamous sold out show at the Regent Theater in Downtown Los Angeles. The band also performed shows across California with Death Angel, Act of Defiance, Prong, Trauma, Blind Illusion, Skitzo, Cultural Warfare, The Hoods, Madrost, Dr. Know, Night Demon, The Ghost Next Door, Niviane, The Venting Machine & Ac/Dz.

In 2019, drummer Rob Rampy ( D.R.I.) joined and helped write and record American Nightmare once again produced by Nick Bothelo and Julian Kidd, along with Ty Sowers. The CD features eight brand new tracks, two freshly recorded songs from the first record («End of Days» & «In Hell») as well as stunning cover art and graphics. In addition the debut video from American Nightmare entitled «Rosa» was also recorded with Mike Sloat at the helm.