Chaosaint and debut EP In The Name Of 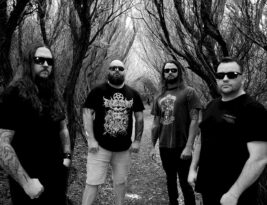 Australian Alternative Groove Metal band Chaosaint is set to release their debut EP In The Name Of coming Friday, 19 June 2020. They reveal today artwork and tracklist (see below). Chaosaint released a lyric video, Darkness Following, to offer a taste of what will hit you. Also, the band released the song Knives Are Drawn on Triple j Unearthed which you can find here: https://www.triplejunearthed.com/artist/chaosaint

Chaosaint says about their single Darkness Following: “It’s a song about how no matter how hard you try, your hardest and darkest emotions are always with you. You can run away, but your problems stay with you until you confront them or alternatively carry them your entire life.”

Chaossaint want «to channel some of our 80’s era metal roots on this track. Growing up listening to Metallica, Ozzy, Iron Maiden and Motorhead, we were always fans of the whole energy and driving rhythms behind most of the songs from that time. Most of the riffs for the song actually stem from an impromptu jam all the way back in 2007 for another project Shay was involved in at the time. Feeling that the vibe of the song suited the hard rock style we were going for at the conception of this project, we began jamming on this in 2016 and turned it into the fist—pumping melodic thrash anthem you hear today.»

Unable to play live to promote the release due to current restrictions on live music due to the COVID 19 pandemic, the band are already working on material for a full-length album with a 2021 release date and also intend to release more material from the initial lost recording sessions later this year.

Hailing from Newcastle, Australia, Chaosaint incorporates elements from groove metal and melodic hard rock, into their own brand of Alternative Groove Metal. Aiming to combine driving rhythms with chunky guitar riffs and a vocal style that leans towards melody whilst still maintaining an aggressive edge. The four band members initially formed whilst still at school back in 2001. Originally known as Exhale, the band found a degree of success in the height of the ‘Nu Metal’ craze of the time and played a variety of live shows both in their home region and Sydney including a support spot for power metal band Dungeon at an all-ages show in Penrith in December 2001. Unfortunately, with the relocation of several key members at the end of 2002, the end came all too soon.

Late in 2015- Jon Cribb approached the rest of the band proposing to return to writing new material. Initially beginning as a hard rock band- the heavier influences of the past began to progressively show through, leading to the creation of Chaosaint‘s blend of Alternative Groove Metal. June 2020 will see the release of the 5 track EP In The Name Of to their growing fan base.