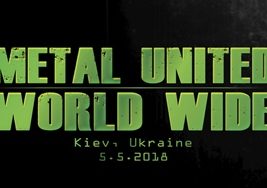 On May 5 this year, the Metal Community will come together for a united event, Metal United World Wide. To overcome the distances between the widespread individual communities, shows will be organized in around 50 cities around the world on the same date under the united banner.

All continents (except Antarctica) are in. Canada, the US, Germany, Ukraine and Australia are probably the less surprising participants. The Central and Latin American countries as well as Turkey, Indonesia, Thailand and India should not come unexpected either. But how about Kenya, Zimbabwe and Gabon? And did you know that Papua New Guinea, Mongolia and Lebanon have a Metal Scene? Even war-torn Syria is planning to join the party with a show in Damascus. Currently 50 countries are participating and some others are considering to come on board as well.

Thy Despair band plays dark metal since 2006. Man’s aspiration for freedom and his scramble with insidious creatures willing to enslave his body, mind, and soul is the main idea the band develops in its lyrics. Thick guitar sound interweaving with dark and gloomy melody are completed with heavy male growl and lyrical female soprano voices. Currently the band is working on EP which will be published this spring.

Arhat – oriental groove metal project from Kyiv. The band was formed in the capital of Ukraine in 2017 and consists of experienced musicians. In a short term, the material was composed and worked out. That material formed the set-list of the collective. The lyrics balances between severe reality of social life and oriental mythology.

The musicians recorded debut EP “Mantra” after first gigs. The date of its release is January 7, 2018.

In summer, 2016 Mort took a decision to form a full band, continue performing as lead guitar. Ordog (guitars), Felix (drums), Prometheus (bass) joined and started to create new tracks for the next album. Later Noctis joined on keyboards and finally the band got a voice (Corvus) in the beginning of 2017.

In autumn 2017 Prometheus has left the band and Gera replaced him on bass.

Smothering Silence is a dark/doom metal band from Kyiv, Ukraine, that was founded in January 2013 with the current lineup established in 2016.

Dark lyrics are brightly expressed in the band’s work. The key themes are about time, life, and death, about the feelings and emotions that enslave us, about addiction and obsession.

The music is based on melodic and heavy guitar riffs. An effective range of vocal techniques adds a certain mystery and mystique to the songs.

The band «Lethargy» will perform almost in its initial lineup and will provide you with the program of the first two albums. Before you will appear the founders of the band: Alexander Shirinsky, Alexander Kuznetsov, Vladimir Sirenko. And also people who partook in the recording of second album: Sergey Kovbasa and Eugeny Kugaevsky. After more than 10 years, we are back in line and prepare for all lovers of our early creativity program «Bondage of Human» and «Divine Madness»

PW doesn`t propagate Islam and ISIS. All images for show only.

The main theme of our creativity is the human dark side that gives rise to weakness, cowardice, disgust, hatred, mental disorders.

We call our style «raw industrial», as in our work we can traced a dirty grim atmosphere. 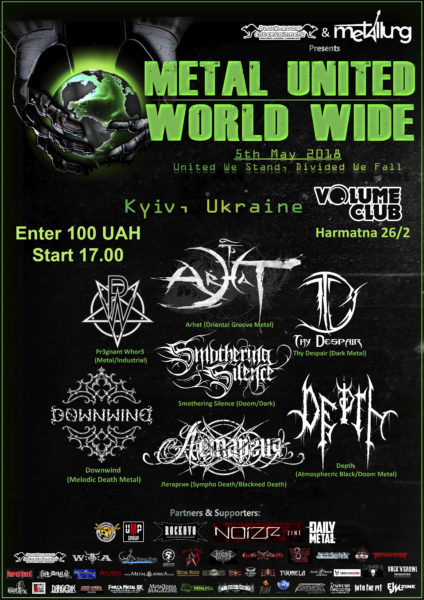