Minatox 69- Nothing New Under The Sun 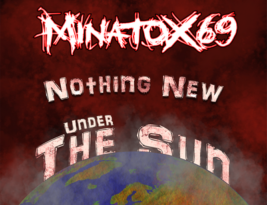 In 2010 friends Fox, Bozart, Checco and Tado formed Minatox69, releasing the debut album “La Foca Nel Deserto” the same year and adding second guitarist in Cupido to their ranks around the follow-up “Hot Line” in 2012.

The next years saw the band touring Italy extensively with band members also taking part in various side projects and gathering experience before emerging back onto the scene as Minatox69 again in 2019, audibly matured, bringing with them a new offering in the form of the “Zero” EP and having signed up with Mad4Music Management.

Released to critical acclaim, “Zero” not only scored the band various airplay spots but also enabled them to do gigs alongside Sepultura, Lacuna Coil, After The Burial and many others.
Created under producer Stefano Orchid Santi’s watchful aegis at SPVN Studio in Milano, Italy, their upcoming full-length “Collapse” presents a band exuding vigor, untamed energy and a sense of belonging!