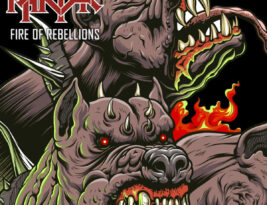 Martyr is a heavy metal band from Utrecht that has existed since 1982. During its existence a set of demo cassettes were released, as well as a number of long players. The general public first became acquainted with Martyr in 1985, when the song » En Masse (Stand Or Die) » appeared on the collective album » Metal Massacre VI » of the legendary American label Metal Blade. Other greats on this record included Possessed , Hallow’s Eve, Dark Angel, The Obsessed, Hirax, Hades and Nasty Savage.
​​
​​         The debut album » For The Universe » from the same year is still considered a classic in heavy metal circles. For example, the leading website » Encyclopaedia Metallum: The Metal Archives » wrote the following about this album: «Martyr’s songwriting is vastly superior to most of its competitors». In 2014, the group was honored by the » Dutch Steel (80’s Metal From The Netherlands) » collector for Martyr’s contribution to Dutch heavy metal history. E.e.a. the then mayor of Utrecht, Jan van Zanen , did not miss either, he sent the group a personal letter in early 2018 to thank Martyr for their ambassadorship for the city.
​​

​​         The group frequently performs at home and abroad, as a headliner or as a support act for a better-known act within the heavy metal spectrum (for example as support of ex- Iron Maiden singers Paul Di’Anno and Blaze Bayley, Trivium, Iced Earth, Manilla Road , Lizzy Borden, Raven and Saxon ). The absolute highlights of Martyr’s career so far have been their 3 tours in Japan , which featured frenzied crowds. The feedback Martyr receives based on their performances is purely positive.
​​
​​         Martyr is now writing songs for the new album with already two released singles «No Time For Goodbyes» (1 June 2020) and «Fire Of Rebellions» (17 July 2020)