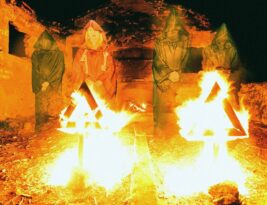 From the alluring forests of the Pacific Northwest comes Portland’s only active symphonic black metal band , Empyrean Fire .  Drawing influence from both modern black metal as well as classic Scandinavian bands, Empyrean Fire has manifested a lush symphonic opus with the shadow of the cascadian sound not far behind.  Bombastic melodies soar over cinematic soundscapes as dominating vocals tear through each track and burst through the veil.  Dazzling structural details burrow into the subconscious as the dizzying depth of all the layers present on this release demand another listen.  The concept behind Empyrean Fire was ruminated upon for years by front woman, Tricia Myers , after reading Milton’s  « Paradise Lost » and « Paradise Regained .»   « Corruption » is the third chapter from the anticipated album, entitled « Deliverance ,» which is planned for release this Winter.  The album is a sinister take on Milton’s work, reshaping it with harrowing twists and malevolent revelations, each chapter a battle in the dragon’s ascent to gain command over Hell on Earth.  Will you bow down in battle, sunken before the spear?

Check out this video for « Corruption » produced by Jason Aaron Wood !